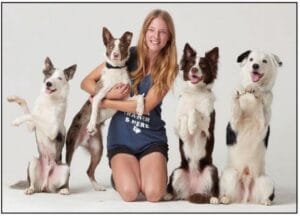 Hero has his own fans after showing off his skills last year on TV, being a finalist on America’s Got Talent, performing in dog shows and teaching dog lovers how to train for new tricks. — When Sara Carson and her dog, Hero, made it to the finale on America’s Got Talent, the nation fell in love with The Super Collies, who could do everything from handstands to backflips and even “sword” fight.

The question I got asked is how long it took me to train them to be such entertainers. The answer might surprise most; I tell them it’s five to ten minutes a day, and they look at me like I’m crazy. That’s all it takes to have not only a well-behaved dog, but also a happier dog. Happier, because dogs are just like people in that they not only need to be exercised regularly, but also need stimulation.

A long walk or hike for a dog might serve to wear them out so they’re not jumping all over people, but upon return, they might still be bored, which leads to mischief. Since my television debut, I have traveled the world giving pet parents pointers on training their own dogs, from basics like sit and stay to behaviors with a bit more flair. Teaching an old (or young) dog new tricks isn’t as complicated as it seems. I have even developed an app called “PUPPR” to help out in the process. We’re aiming to have basic obedience to advanced tricks on the app. You can basically learn any trick we did on ‘America’s Got Talent’ on this app and the subscription based version gives you the option to talk one-on-one with me. 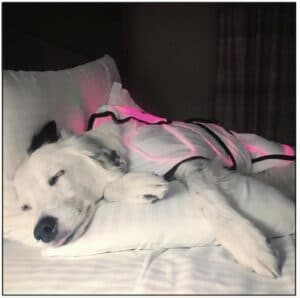 I was introduced to the Wearable LASERwrap® a year ago. I use it on the road and at home. It truly provides Rehabilitation on the Go. After exercising my dogs, they can receive therapeutic treatments to strengthen their muscles and ligaments, which get stressed, especially when practicing and performing ariel tricks. Wearing the LASERwrap® dog coat for a few days and nights, along with some time off, repairs my dog’s wounds and my bruises, then the show can go on! Thank God for LASERwrap®. The LASERwrap® is the first thing I reach for and it works. The dogs use it in the hotel rooms and love it -it’s easy to fold up and pack in a suitcase and charges anywhere. Dogs do their best when they feel their best! Give them the Power to Perform & Recover with Spectra Therapy LASERwrap®.

*Photos provided by The Super Collies

For more information about Sara and The Super Collies visit www.thesupercollies.com

Our shopping cart currently does not accept credit cards — no orders shall be fulfilled.